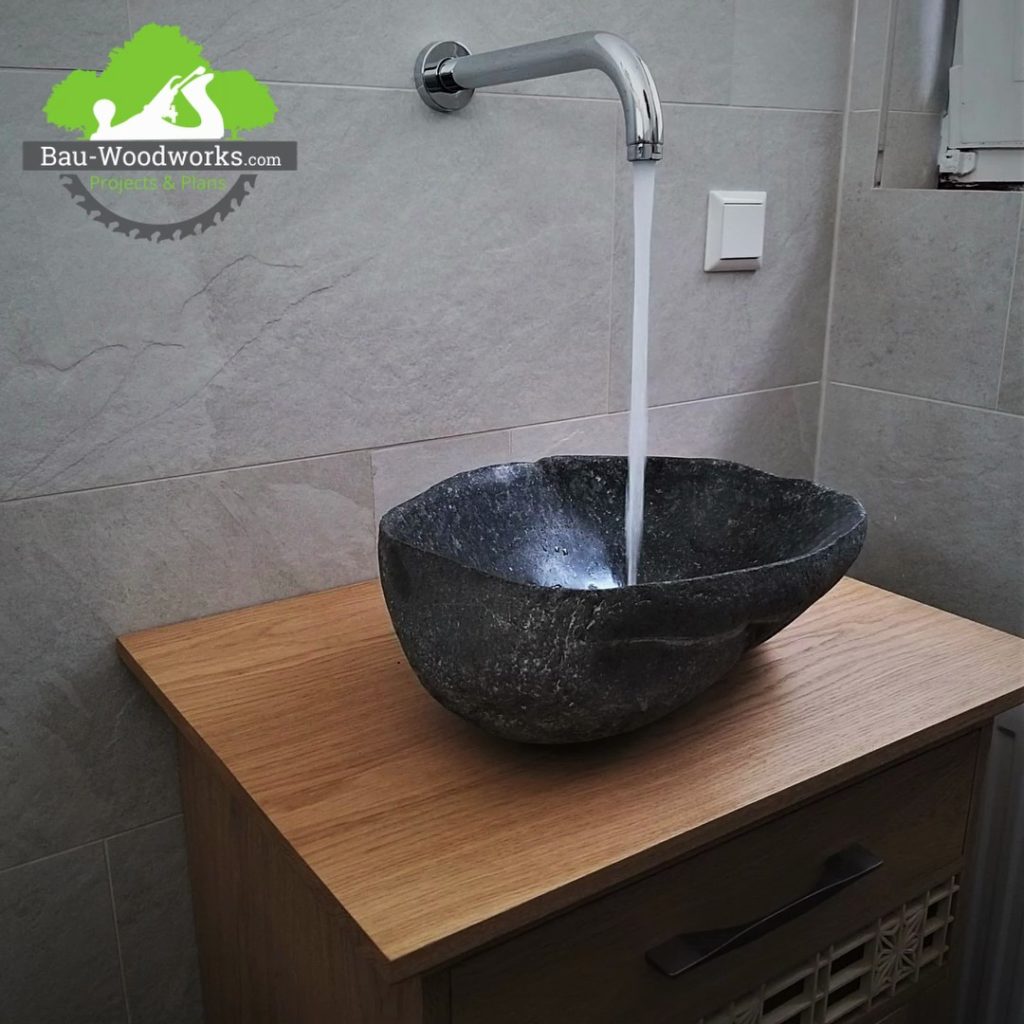 A few years ago I saw a tap controlled by a foot pedal and found the idea so cool. Now I had the chance to build one myself. We renovated our bathroom from the ground up and because of that, it was not much additional work to install such a pedal.

The most difficult part about the pedal-controlled tap was getting the pedal. After countless hours online I finally found a suitable pedal on eBay in Italy. In Italy, this was kind of a standard for public toilets a while ago.

Hot and cold water are mixed by a three-way valve to the desired temperature, which is installed in the wall and the pedal only turns on the water. Thereby the pedal has a single ingoing tube and one outgoing that goes back into the wall and connects to the tap. The tap is a tub spout. Everything connects with armored hoses.

Alright, enough about the water let’s get to the woodworking.

Design of the cabinet

The design of the vanity stand took some time. This was by far the most ambitious woodworking project I had tackled at that time. I drew the design out on paper numerous times until I was satisfied.

I really wanted to integrate some Kumiko into it since I have learned that skill recently. The pattern I chose is Asanoha. Read more about Kumiko patterns in my article.

The first building step was to remove the live-edges from the boards and mill them up. For the case sides, the top and bottom I chose rather quiet grain and glued the panels together.

Then came the most time-consuming part of the build. Handcut a ton of dovetails. 68 pins and 56 tails in total including the drawer. This really pushed my dovetail skills and I am pretty proud how they turned out. My new Veritas Dovetail saw definitely came in handy at this stage.

I inserted the two horizontal dividers with sliding dovetails cut with a router bit. They bot received a little rabbet in front in order to hold the Kumiko panel.

I’ve cut the front for the drawer first then the sides and the back. The bottom is a thin book-matched panel and I really love the pattern it creates when you open the drawer. The drawer has this u-shape for the savage pipe. I joint all the pieces for the drawer with dovetails once again. Btw I used the 1:6 ratio and I am a pins first guy. This makes marking so much easier and I find it gives me better results.

The door is a classical frame and panel construction and cut on the router table with a standard round bit.

Cutting the Kumiko pieces was my favorite part about the build. There is a certain relaxing and satisfying thing about this quiet task. It’s almost meditative. I’ve cut the grid on the table saw with a jig pretty similar to a box joint jig. For the infill pieces I’ve used guide blocks and trimmed the wood strips with a sharp chisel. Check out my article series about Kumiko if you want to get into Kumiko or explore new patterns.

The base was made quickly and there is a secret to them I don’t really feel comfortable sharing… I reinforced the miters with screws. Yes, regular screws. I know. It was late, I was tired and I thought nobody will ever see it. So please don’t tell anyone 😉

In order to separate the top and the base from the cabinet, I added narrow strips to the cabinet.

Somehow the piece didn’t look right. The top was too clunky, therefore I added a light chamfer to the underside of the top. I really liked it and made it heavier and heavier until it had the perfect size for me.

Then came a pretty terrifying moment, drilling a hole in the top. It just feels wrong to take a huge hole saw to your almost-finished piece and launch it right through the center of the top.

As a finish I applied 3 coats of Osmo. The oil wax blend gives it enough water-resistant.

I’ve seen the natural-edge stone sink on the internet and immediately knew it was perfect for this.

I can’t tell you how excited I was when I first stepped on the pedal and the water turned on!

I will have plans for this soon…