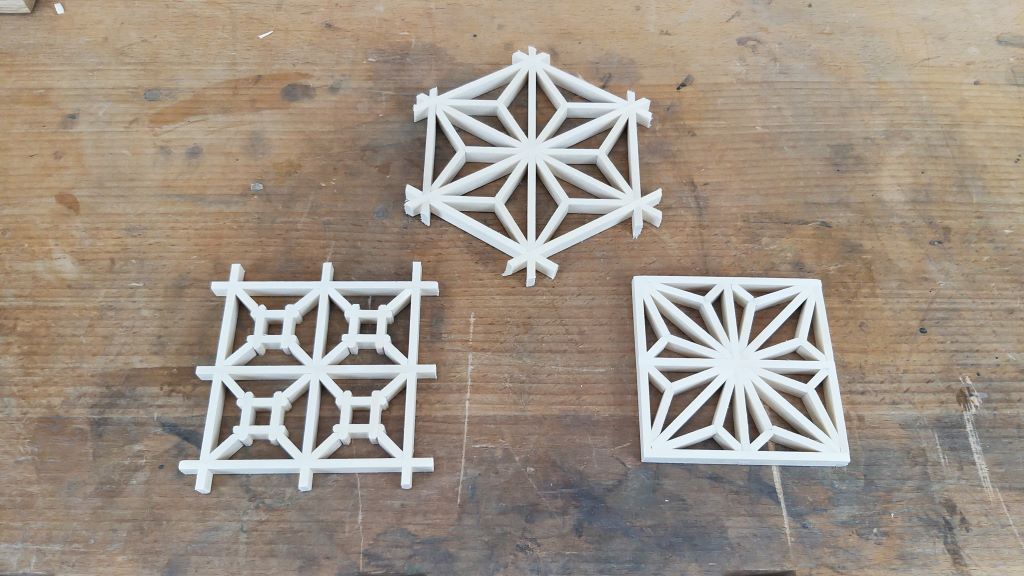 There are hundreds, maybe thousands of different kumiko patterns that are used not only by japanese woodworkers.

In this article, I want to show and talk about a bunch of them.

Note: I am gonna add pictures of every pattern as I build them and also more patterns in the future.

The base of the patterns is the grid (kaku). The grid can be made up of squares(), triangles (Misukude) or diamonds().

The Mitsukude and diamond grid are a little bit more challenging to make. The square grid is great for beginners.

How to make the square pattern

Asa-no-ha means hemp leaf in Japanese and shall mimic its shape. Kakuasa-no-ha just means square hemp leaf. In Japan the pattern is often used on the fabric of baby clothing and stands for strength as well as beauty. It is one of the most used patterns, although it is not that easy to make. 3 different infill pieces have to fit perfectly and a total of 7 infill pieces is needed per square. Angles are 45-degree, 22.5-degree and 67.5-degree.

This pattern looks fairly simple. It’s a small square held by 4 diagonals at the corners. In order to make this pattern a 45-degree jig enough. It is pretty quick to make, too.

Triangular patterns around the Mitsukude

The asa-no-ha in a triangular grid is fairly easy to make and one of the easiest patterns in terms of infill pieces. You only need one setting on the 30-degree jig and another on the 60-degree jig. One triangle gets filled with 3 pieces. Once the grid is done, this Kumiko pattern fairly quickly knocked out. In the Japanese believe that the aggregation of triangles protects against the evil.

Kuruma means car in japanese or in this case wheel. Kikko just means that it is hexagonal.

The pattern consists of the same piece over and over. It has 60-degree bevels on the end and two 60 degree half-lap joints on opposite sides.

The cherry blossom (sakura) is one of the most important symbols in the japanese culture and known as the national flower of Japan. So no surprise that there is a Kumiko pattern for sakura.

Sakura symbolizes beauty as well as mortality and is believed to predict that year’s harvest. It also kicks off the rice planting season.

The pattern consists only of 2 different pieces but needs 6 pieces per triangle. The bevels on the thicker pieces are 60 degrees and on the thinner pieces as well, but there are two on each end.

The thinner piece can be joint either with a normal groove in the thicker piece or with a bird’s mouth joint.

The goma (sesame) gara (pattern) represents the sesame flower. Sesame is pretty big in the japanese kitchen and Japan is one of the biggest sesame producers.

The pattern consists of the same piece (60-degree bevels on the end and two 60 degree half-lap joints) as the kuruma kikko but with different spacing for the lap joints.

Rindo is the gentian and this pattern derives from a sequence of gentian blossoms.

Gentian stands for sincerity, justice and tolerance. The roots of the flowers are used for medicine.

The rindo pattern is also made of the same piece over and over. It has a 90 degree half lap joint, a 15 degrees bevel on one end and 75 degrees on the other (the one closer to the half-lap).

Get your Kumiko Starter kit now

In my shop, you find Kumiko Starter kits for sale. Give yourself a headstart and order one right away.